Key developments over the past week; 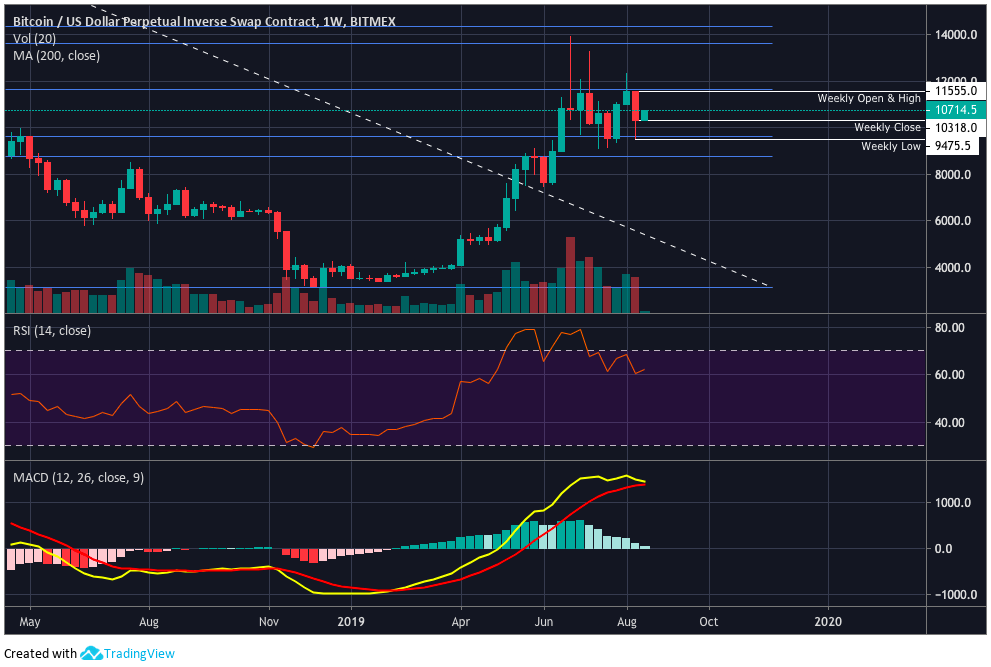 Despite a predominantly bullish outlook last week, bitcoin significantly declined from the 50% retracement level between the December 2017 high and the December 2018 low. The 50% retracement level, priced at $11,623, has been an important level for trading. Trading two weeks ago resulted in price action trading above this level but a failure to close above on the weekly chart was followed up by declines last week with the price dropping into sub-$10k territory. Last week’s decline reversed any appreciation from the week beforehand suggesting it is a seller’s market. The low of last week was priced in at $9,475, a 12% depreciation from where price opened at $11,555. Price managed to recover 8.5% from lows to close at $10,318.

One important development to note is the movements in the lagging momentum indicators, the RSI and MACD. These metrics are often used as a gauge of buyer/seller momentum. The RSI has been recording a series of lower lows and lower highs since forming a double top from late May to early July indicating increasing seller momentum. The MACD has also begun converging to the downside and is approaching a crossover of its signal line to the downside. The MACD crossing its signal line to the downside is widely considered to increase the odds of bearish price movements in the following candles. 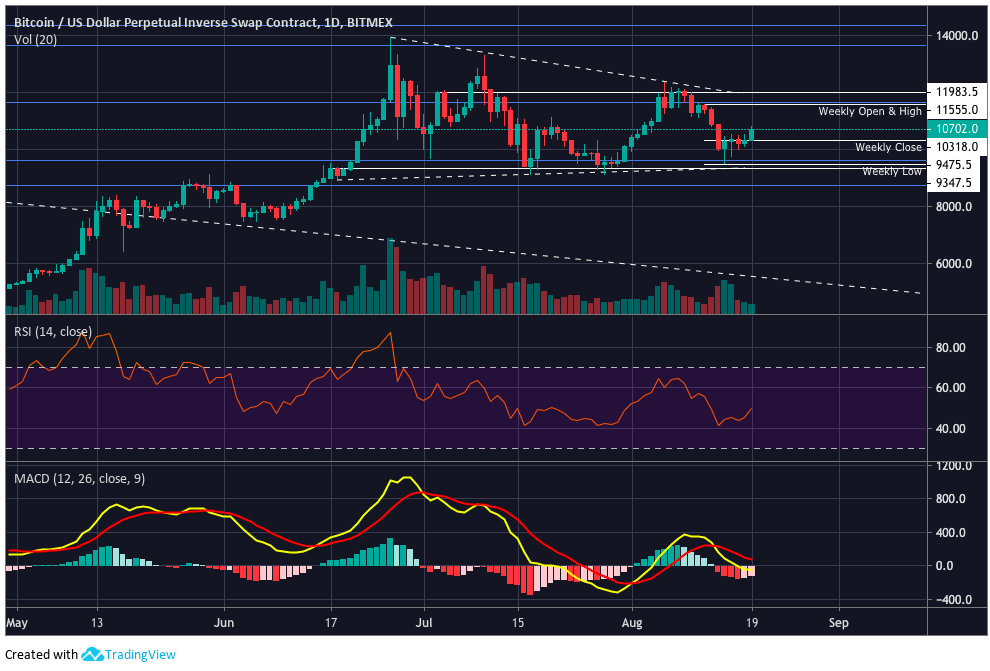 Yesterday’s price increase was recorded on low volume and although the price has managed to appreciate over 3% today, the increase is also being recorded on little volume. This strengthens the bearish outlook being formed by the declining MACD and RSI on the weekly charts. 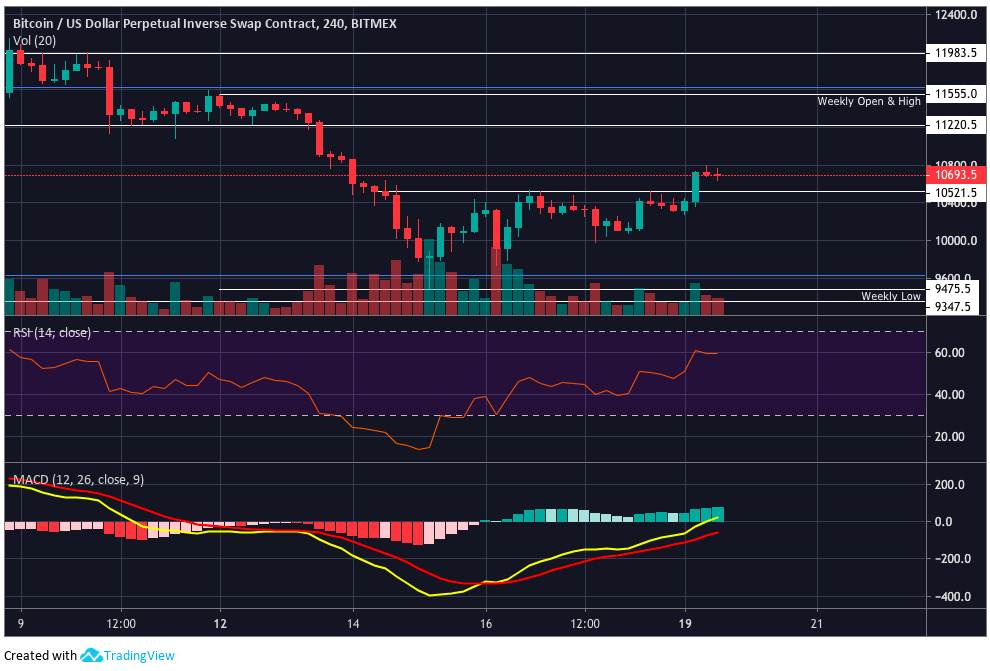 In intraday trading, one level to monitor is $10,521. After several tests, price broke above this level in recent trading. The level may act as support in the event of a decline. 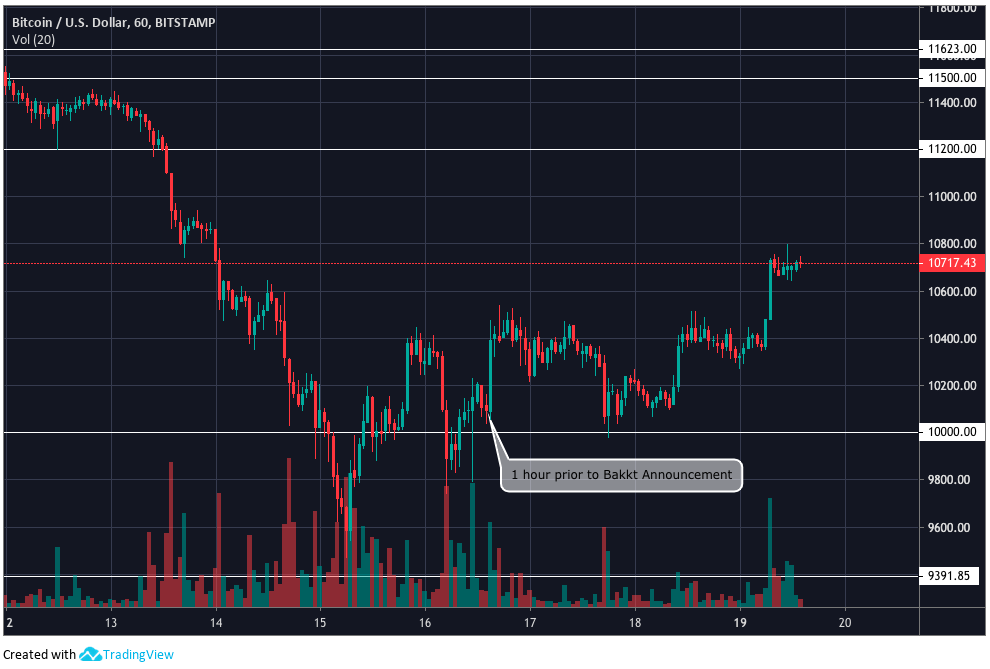 One hour before Bakkt officially announced the upcoming launch of their futures products on Twitter, the price of Bitcoin recorded a 3% increase over the hour. Bakkt was a highly anticipated and important news development for the Bitcoin market. These products will be the first physically-settled bitcoin futures contracts. Many foresee these products paving the way for further institutional investment. The Bakkt futures are scheduled to launch on the 23rd of September and will likely lead to greater liquidity in the spot market. 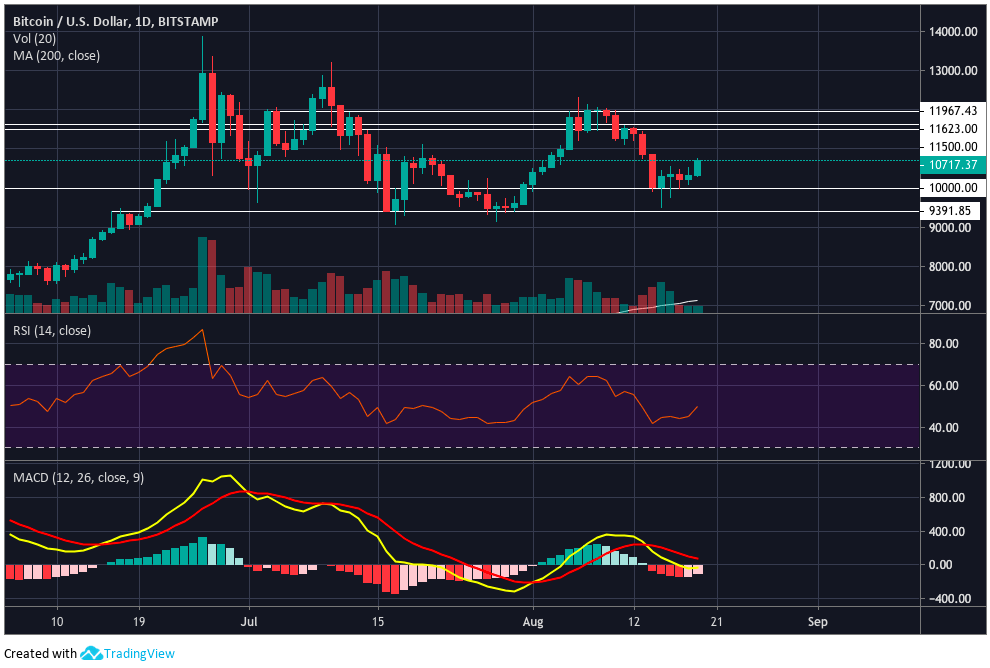 The price of bitcoin has failed to hold above $11,500 for any meaningful amount of time. Analyst Kevin Kelly from Delphi Digital has been monitoring the level as an important area of trading activity. The 50% retracement level lies approximately 1% above at $11,623. No weekly candle has managed to close above this level in 2019. Above this, analyst Murad Mahmudov from Adaptive Capital has been monitoring $11,967 as an anticipated area of selling pressure.

$10,000 is an important level for the price action of bitcoin given it is an important psychological price point. It represents the point where bitcoin is either in four-figure or five-figure territory, a point which traders, the media, and analysts do not take trivially. After the price rose above this level nearing the end of Q2, the level has acted as both an area of support and resistance. Despite dropping below last week during intra-day trading, the price failed to close below on the daily chart, highlighting the importance of $10,000 as a support level.

During price increases in mid-June, the price met resistance at $9,391. This level has since acted as an area of buying pressure and was close to where the low formed last week during the declines below $10,000.

The difficulty level of mining on the bitcoin network increased above 10 trillion for the first time after the latest adjustment on the 18th of August. The difficulty ribbon, which tracks eight moving averages of the difficulty level continues to expand to the upside indicative of a healthy mining environment. A contracting ribbon indicates inefficient miners are coming offline and would be selling the majority of their block reward on the market to meet costs of production. While the technical analysis of price is setting up bearish, the difficulty ribbon suggests that miners will not be selling the majority of their supply.

The Effect of News on Bitcoin Prices