Developments over the past week: 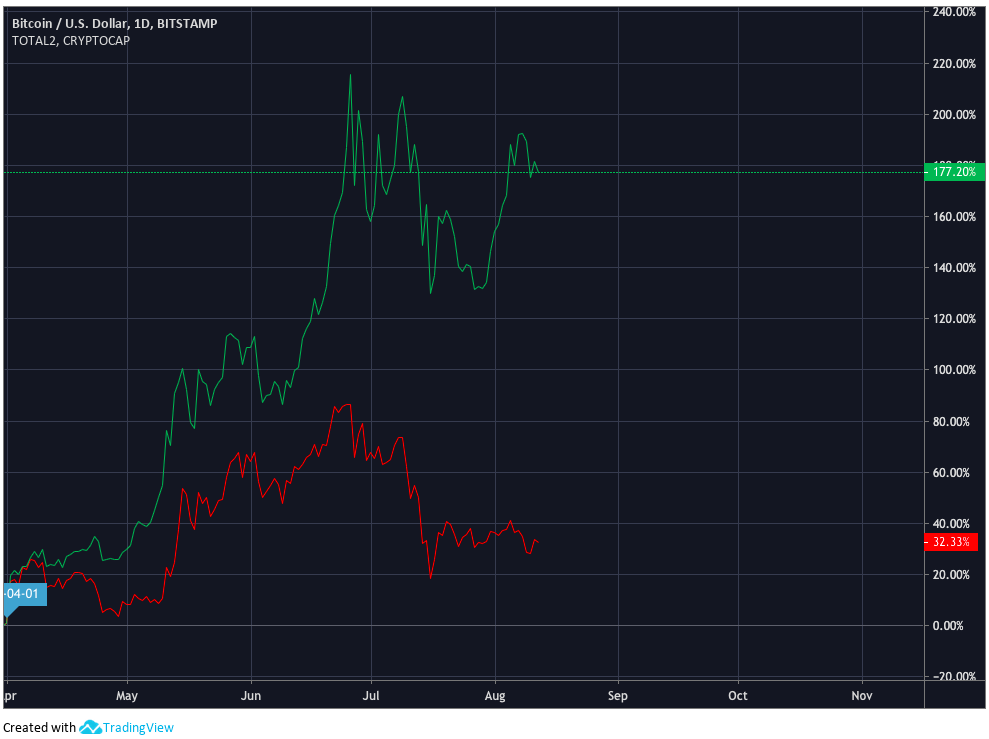 The start of the Q2 was a significant turning point for the cryptocurrency market. Throughout Q1, analysts held mixed outlooks for future price prospects but a clear upward trend initiated at the start of April. Bitcoin has since appreciated over 177%, outperforming the collective altcoin market by a significant margin. Over the same timeframe, the altcoin market cap has recorded an appreciation of 32%. 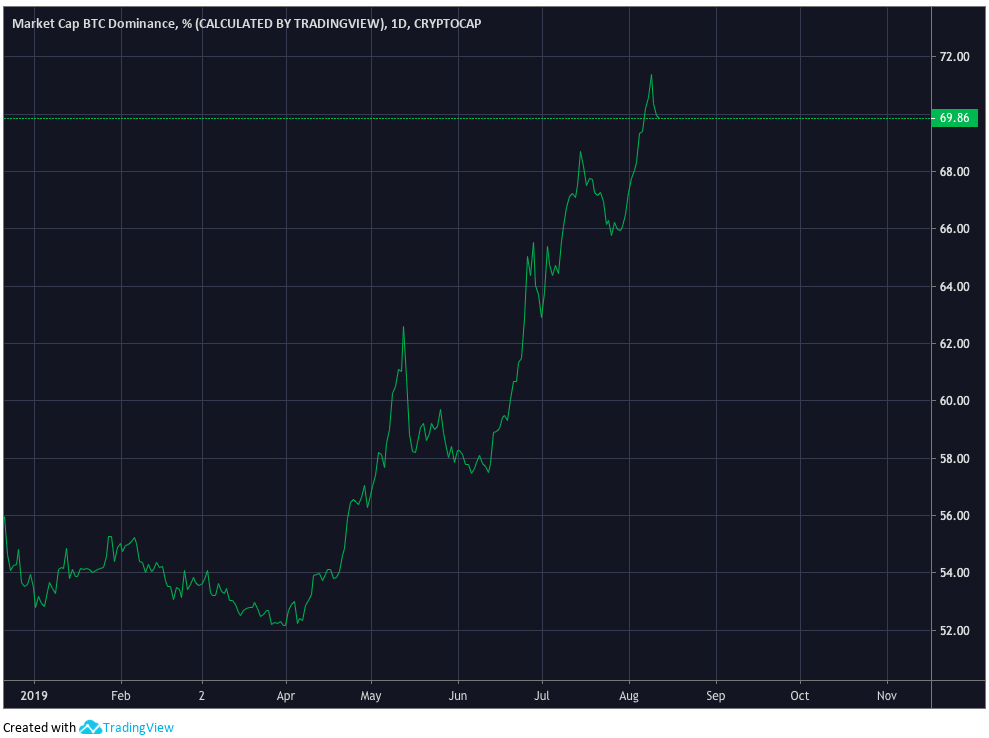 The outperformance of bitcoin compared to altcoins has resulted in the percentage it represents of the total cryptocurrency market cap rising above 70 last week. This is the first time since June 2017 that the Bitcoin dominance figure recorded values above 70%. 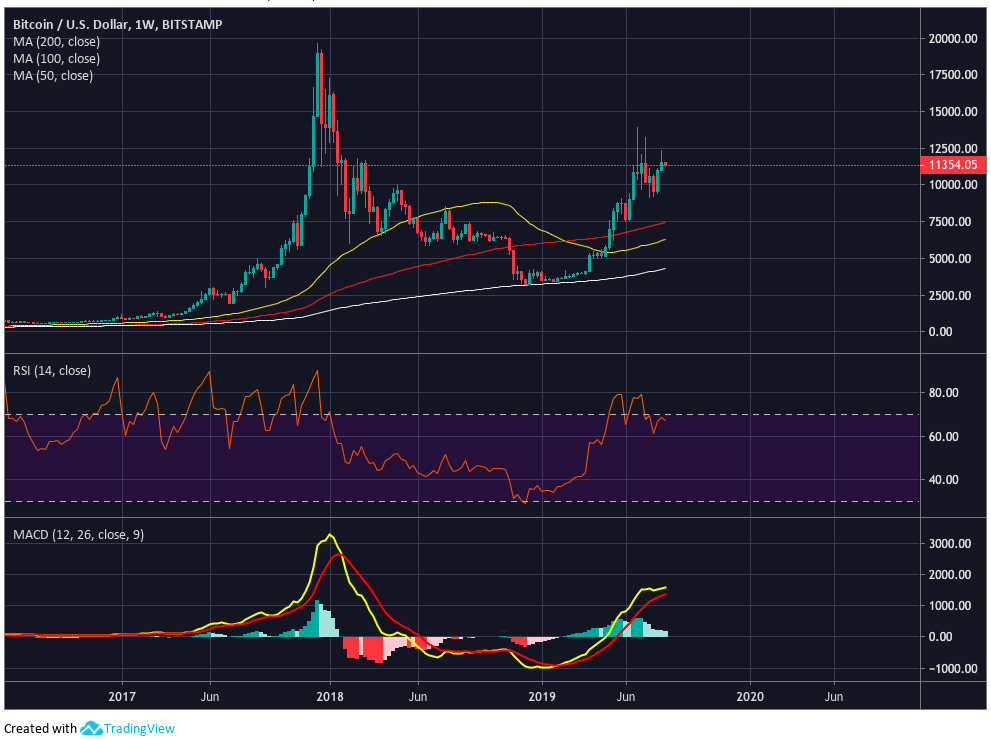 Despite the positive price developments, on the weekly chart, bitcoin has failed to close above the 50% retracement level which lies halfway between the December 2017 high and the December 2018 low. Last week was the fourth week in 2019 which bitcoin price traded above this level but failed to close above. After two weeks of consecutive price increases, selling pressure may be increasing with a higher high failing to form on the weekly price chart and the 14-period RSI forming a lower high. The RSI and MACD are commonly used as measures of buyer/seller momentum. Although the MACD has not yet begun to decline, it has failed to increase over the past six weeks, indicative of a lack of buying pressure.

The lack of buying pressure slightly increases the odds that the near-term trend will transition from sideways to downward. A series of higher lows and lower highs, indicative of a sideways trend, have been observed on the weekly chart since late June. However, given the strong price developments since the start of Q2 and other analysis considerations detailed below, it is far more likely that we will continue to observe upward price movements. 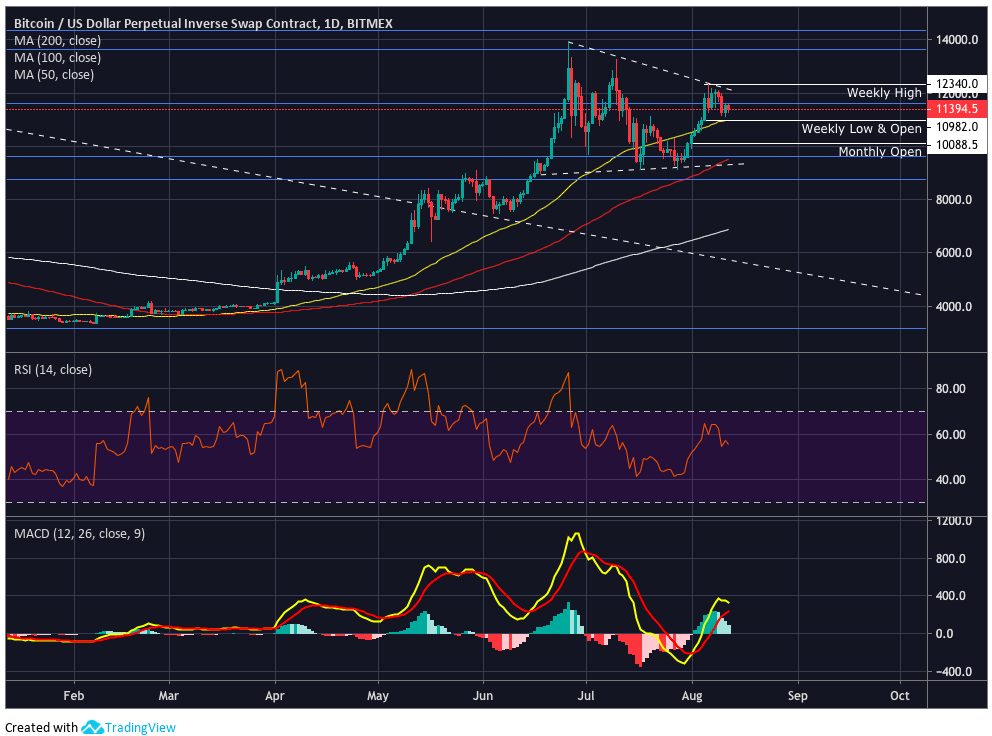 A bullish pennant as indicated by the dotted lines on the above daily chart is the dominant pattern indicating near-term future price prospects for bitcoin. The bullish pennant is a continuation pattern that suggests bitcoin will record more upward movements such as those observed during Q2. The price of bitcoin currently trades above all significant moving averages (50, 100, and 200 SMA) on the daily chart. 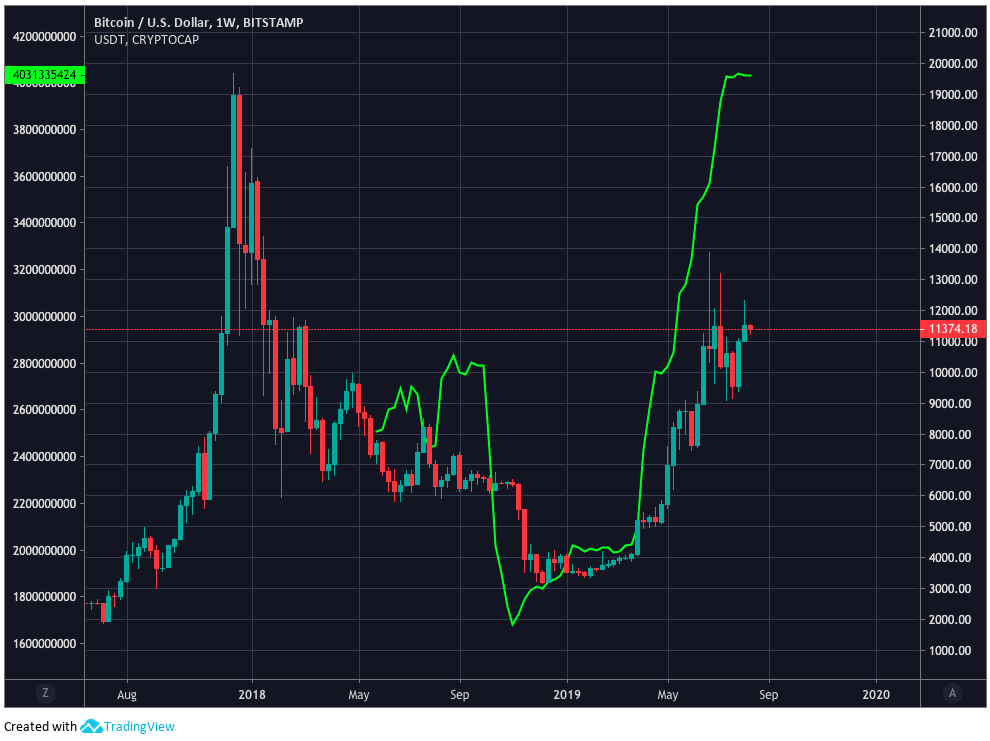 Many analysts hold that tether issuance into the market is representative of fiat inflows and can be used as a gauge for demand-side pressure. No significant changes in Tether issuance have been observed over the past 30 days implying that Tether issuance will not generate additional buying pressure. However, a recent regression analysis by analyst Filb Filb (@filbfilb) comparing Tether issuance to the price of bitcoin suggests that there could already by enough Tether issued to push bitcoin higher in the coming weeks.

In terms of supply-side pressure, analyst Filb Filb put forward the theory that miners are deliberately withholding selling their supply on the market to push prices up before the Bitcoin halving in 2020. With miner profitability high after the price increases observed in Q2, this theory is logical given that miners are not under significant pressure to sell their block rewards to meet production costs.

On-chain analyst Willy Woo (@woonomic) recently introduced a metric coined The Difficulty Ribbonto help assess the amount of bitcoin miners are offloading onto the market. The metric tracks moving averages of the difficulty level of mining on the Bitcoin network to help assess points where inefficient miners are selling significant amounts of bitcoin. These points are represented by ribbon compression and these areas also correspond closely with times of market capitulation. With the moving averages of the difficulty ribbon currently trending upwards as shown below, the indicator suggests that miners are not currently selling material amounts of bitcoin in the market.

Over the past week, Bitcoin dominance rose above 70%. Although the dominance has since dropped below, a bullish continuation pattern and demand and supply conditions indicate that the path of least resistance is to the upside. A drop in buying pressure was observed on the weekly but the dominant outlook remains bullish.

We are the first one-stop trading platform that brings all the features and functionalities of Crypto asset trading together to cater to beginners and experts alike.

Our platform is a non-custodial trading platform which means you do not need to keep your crypto assets with us. Your assets remain in an exchange account and you link that exchange account using an API key and Secret and only allow Read/Trade access.

Register today and give us a try - Capfol.io

The Effect of News on Bitcoin Prices